What are scenes and how do you create, use, and export them in Ecamm Live?

What is a Scene?

Scenes allow you to quickly switch between presets—including overlays, source modes, and more—during a live stream.

A scene may encompass the following Ecamm Live settings:

Suppose you are running an interview show. You may want to have one Scene where it is you and your guest, both displayed with names below your video. Then you can create a Scene for just your guest’s video and their name, and another for just your video and your name. Then you can quickly switch between all three views during the interview. We recommend taking a little time to plan out your overlays and then orchestrate them using Scenes. It can help your broadcasts go smoothly.

Overlays are always auto-saved as you create and edit them. If you want to create an overlay within a particular Scene, create that Scene first, or it will appear in your previous or default Scene. 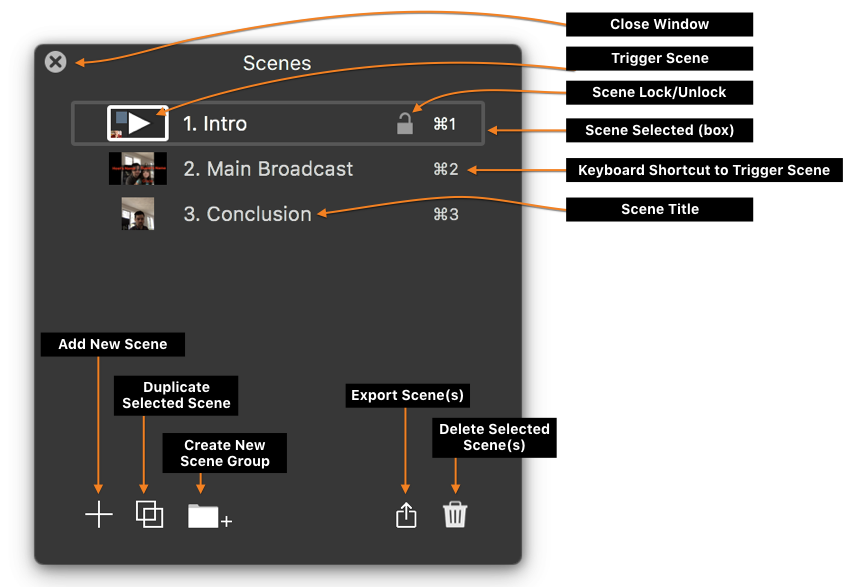 There are 5 ways you can select a Scene to display:

Overlays That Appear in Every Scene

If you want an overlay to appear in every Scene, for example, a logo to appear in the corner of your video, select the the overlay in the Overlays Window, and drag it to the top of the window under the heading SHOW IN ALL SCENES.

Pro Tip: It’s useful to give each Scene a clear, distinct name. While you’re live in front of an audience, you don’t want to spend time wondering which Scene is which. In the Scenes Window, double-click the name of the Scene you want to rename. If your stream is scripted, consider putting your Scenes in chronological order before going live. Then you can use the arrow commands ⌘ → and ⌘ ← to quickly jump to the next Scene. For even more organization, see Arranging and Grouping Scenes below.

To make different Scenes that share common components, it’s easier to create a new Scene based on an existing Scene. To duplicate a Scene:

Could your Scenes list use some organization? Simply drag Scenes around to re-order them. Also, try grouping them.

To prevent a Scene from being edited or deleted by mistake, you can lock it by clicking the lock icon next to the Scene title.

With the Scene selected in the Scenes Window,

When you create or modify a Scene, it is auto-saved. If you quit Ecamm Live, and later reopen, all Scenes and settings will be just as you left them. Ecamm Live can, however, import and export Scenes. This allows you to backup your work in a file or share your Scenes to another computer, You may also wish to keep around different sets of Scenes if you have multiple broadcasts with different setups. Ecamm Live Scene files have a .ecammlive file extension. 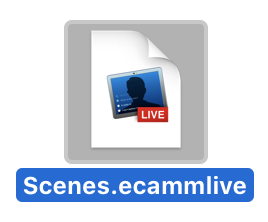 There are two methods to export a file that contains all the settings of a Scene.

Importing a Scene from a File

What Is and Is Not in a Scene File