Elgato also makes an iOS version of Stream Deck, which turns your iPhone or iPad into a full-featured wireless Stream Deck! 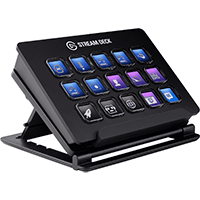 Ecamm Live includes a plugin, which adds 28 custom actions to your Stream Deck.

Upon opening Ecamm Live, if the Stream Deck software is detected, you will be prompted to install the plugin.

Once installed, scroll down in the Stream Deck app's list of actions, to find the Ecamm Live section. 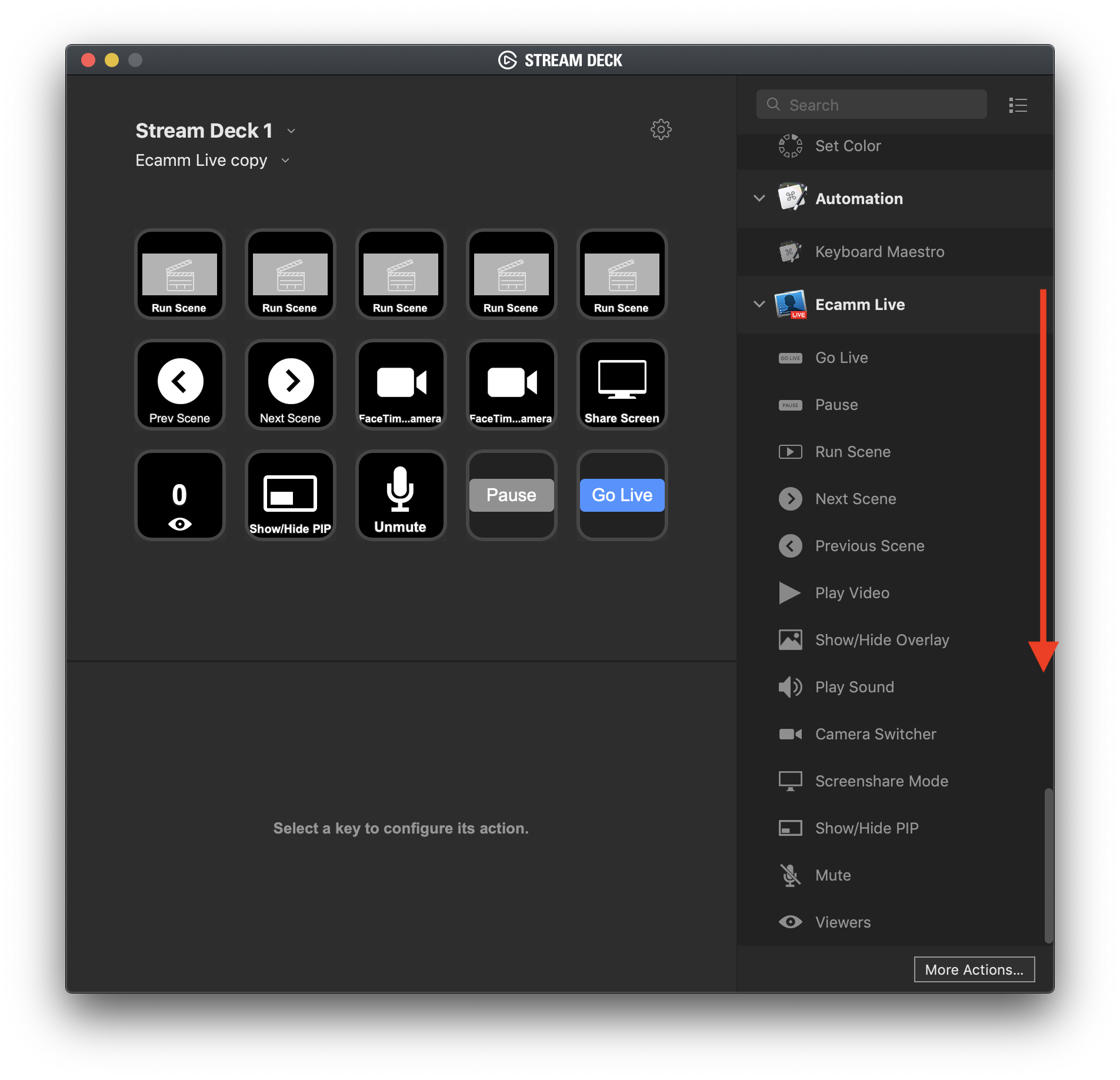 Action keys can be added and customized as needed. To add an action to your Stream Deck, drag it from the sidebar to the desired key location.

Some actions have additional settings that need to be configured before use. Select a key to configure its action.

The Ecamm Live custom actions include:

This action will provide a Go Live key (or Finish key during a broadcast.) It will also change to a Record key when in Record-Only mode.

The Go Live key can be set to go live to a specific destination with a pre-supplied title and description, or to go live to the currently selected upcoming broadcast.

A pause/resume key, used only for Record-Only mode.

Your Scenes from Ecamm Live will be listed in the popup menu. To configure, pick the desired scene.

A green rectangle around the key's icon will indicate the current Scene.

Move sequentially through the Scenes in your Scenes window.

Roll a pre-recorded video. To configure, select a video from the Finder, or pick from your recently played videos.

Pressing the action a second time will end the video and return to the previous mode.

A quick way to play music or a sound effect. To configure, select a sound file from the Finder, or from the list of Sound Effects. Additional settings include volume level, and an option for playback behavior. (Play/Stop, Play/Restart, or Loop/Stop)

Note that this action should always be used in place of Stream Deck's built-in Soundboard: Play Audio action, as Play Audio will not automatically route the sound into your Ecamm Live broadcast.

Add a chapter marker. This will add the time index, and optionally some text, to a text file in your Recordings folder.

Use this action to switch to a specific camera when multiple cameras are connected. To configure, select the desired camera. A checkbox is also provided to indicate whether or not to switch into Camera mode. (Uncheck this checkbox to trigger a camera switch without switching to Camera mode, for example if you're in Screenshare mode with a picture-in-picture window.)

This action will switch to Screenshare mode.

This action will toggle on and off to Live Demo mode.

This action will hide and show the main window's control buttons.

This action toggles the picture-in-picture window. When in Camera mode, it will switch between split-screen mode and PIP mode.

Mute an audio channel. Press the action again to unmute.

This action displays the viewer count from the current streaming platform. Pressing the key does not do anything.

The SOLO key can also be used to accept an incoming guest connection.

Adjust the input level (volume) of each audio channel.

Select a scene in the Scenes window. Press the dial to select the scene.

Select an overlay in the Overlays window. Press the dial to show or hide the overlay.

Select a sound in the Sound Effects window. Press the dial to play the sound.