Streaming and Recording in 4K

Learn how to stream and record video with 4K resolution.

Ecamm Live supports 4K live streaming, but you'll need the following in order to have a successful 4K stream:

You'll find Stream Size settings in Ecamm Live's Options menu at the top of the screen, or in the Stream section of Preferences. This size will also be used for automatic local recording and when recording in Record Only mode.

If you do not see the 4K option listed in this menu, this indicates that your Mac does not support 4K streaming.

The stream size cannot be changed during a broadcast.

There are two main ways to get a 4K video feed into Ecamm Live:

The quickest and simplest way to enjoy 4K camera resolution is to connect a USB webcam that supports 4K, such as Logitech's Brio webcam.

Once connected, Ecamm Live will automatically begin using the camera at a resolution that matches your current Stream Size. (See Setting Ecamm Live's Stream Size above.)

To activate 4K resolution for a camera when the Stream Size is set to a lower resolution, open Ecamm Live's Camera Effects window, and scroll to the bottom of the list of camera effects, to the Camera Options section. If the camera supports multiple resolutions, you'll see a Use Max Resolution checkbox, showing the maximum resolution offered by the camera. Note however this checkbox is only required if you want to run the camera at a higher resolution than the current stream size. 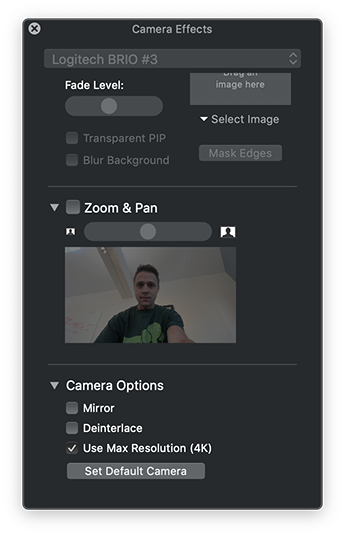 Check this checkbox to begin using 4K. Note: if you do not see this checkbox, the camera may not offer multiple resolutions, or the highest resolution available is already being used.

If a camera's documentation advertises 4K resolution, but only 1080p is being offered on your Mac, your Mac's USB ports or the USB cable being used may not support the data rate required for 4K. Try a different USB cable, and ensure that all cables and any hubs or adapters support USB 3.0.

Although the USB Webcam solution above is quick to set up, and relatively inexpensive, we have not seen glowing reviews of the Logitech Brio's 4K image quality. To achieve a crystal clear, high-quality 4K camera image, use a professional camera, connected to a 4K-compatible HDMI encoder such a Elgato's Cam Link 4K.

An important first step is to identify a camera that provides 4K HDMI output. Note that just because a camera advertises 4K recording, that does not necessarily mean that it supports 4K HDMI output. The camera's HDMI output also need to be "clean", which means that the output does not contain any of the camera's on-screen text or focus rings.

The camera that we've used in our testing is the Canon EOS RP. Activating the camera's 4K HDMI output required setting the camera's mode selector to video mode, and then making some changes in the on-screen settings. Choose HDMI info disp and then pick Clean / 4K output:

Once connected, the 4K camera image will show up in Ecamm Live. Note that you will not see the Use Max Resolution checkbox mentioned above when using Cam Link, as only one resolution will ever be offered by the encoder.

When using a 4K video encoder such as the Cam Link along with a separate audio source such as a USB microphone, audio and video may not be synced up. (Video from the encoder is slightly delayed compared to the audio from the microphone.) To compensate for this, add Mic Delay. We added 6 frames of delay when using the Cam Link 4K.

When using a Canon EOS or other DSLR camera for streaming, there are a few other components that can enhance your experience: